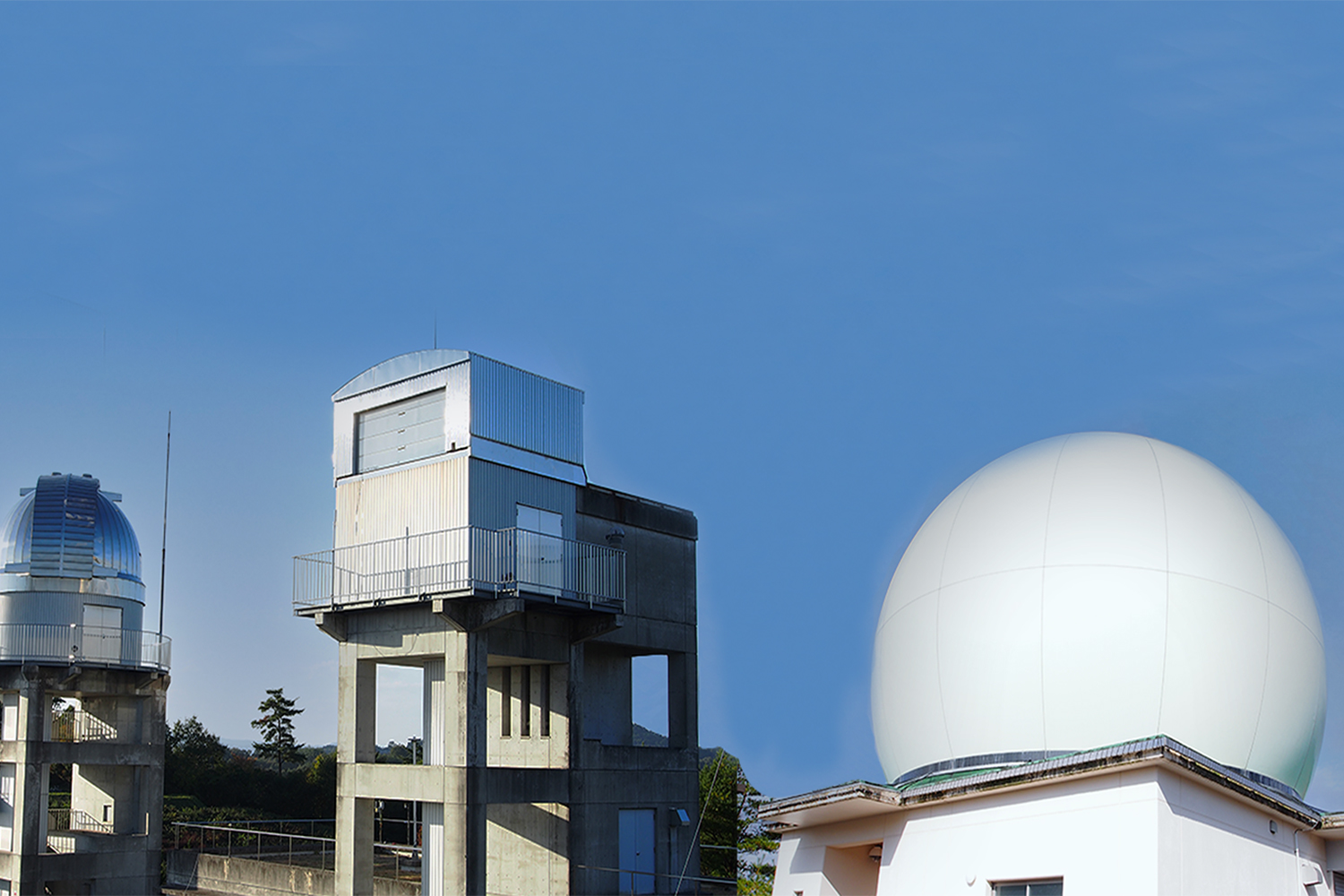 As our space activities expand, the number of satellites and space debris orbiting around the Earth continues to grow, increasing the risk of collision of such space objects.

Satellites are now an indispensable infrastructure to support our daily life, including weather forecasts by meteorological satellites, TV programs via broadcasting satellites, and car navigation system by positioning satellites. It is imperative to be aware of the orbits of space objects, such as space debris, and maintain a catalog of these objects for the stable use of space, that is, Space Situational Awareness (SSA).

Space debris is defined as all non-functional, human-made objects in Earth orbit such as: Since space activities started around 1956, the number of space debris has been continuously increasing. According to a catalogue published by the US Combined Space Operations Center (CSpOC) which contains space objects up to softball-sized, there are almost 20,000 objects orbiting around the Earth, while the actual number is thought to be more.

The Risks of Space Debris

If space debris collides with an operational satellite or the International Space Station, it can damage or ruin the spacecraft as well as become threats to the lives of astronauts. Once a collision occurs, fragments generated from the collision also become space debris and increase its total number. Most of such objects on lower orbits will eventually re-enter the atmosphere and burn down. But some of them would fall to the ground without burning down, which can cause catastrophic damage to the area.

JAXA has been taking various measures to tackle space debris problems, including SSA activities by Space Tracking and Communications Center (STCC) such as observation and analysis of space debris, as follows:

see here for SSA activities other than observation.

In the 1980s, JAXA conducted joint research with the National Astronomical Observatory of Japan （NAOJ） to observe space objects using NAOJ’s telescopes. In the 2000s, JAXA started developing technologies including analyzing such objects by utilizing observation data acquired at Bisei Space Guard Center (optical telescopes) and Kamisaibara Space Guard Center (radar), both built by the Japan Space Forum. In April 2017, these telescope and radar facilities were transferred to JAXA for the SSA activities expected to gain more importance. Both facilities will be renewed by 2023. 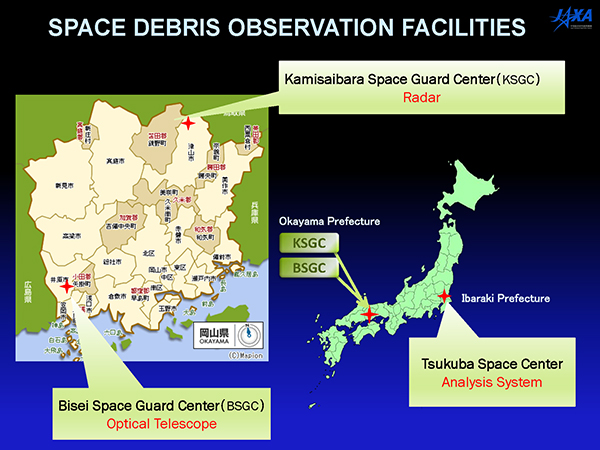 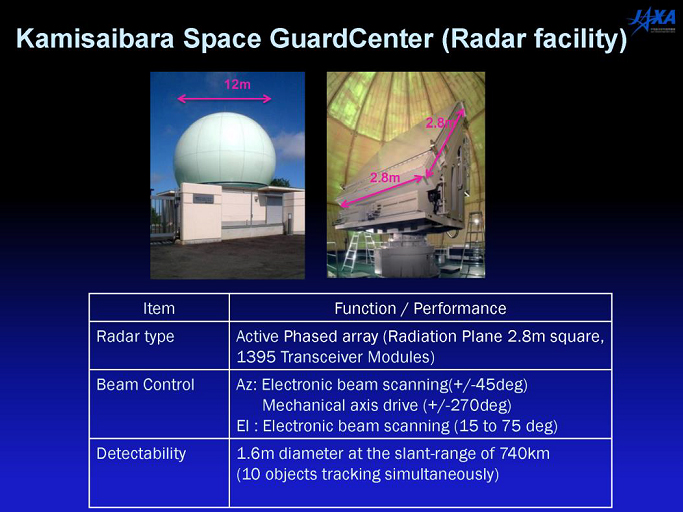 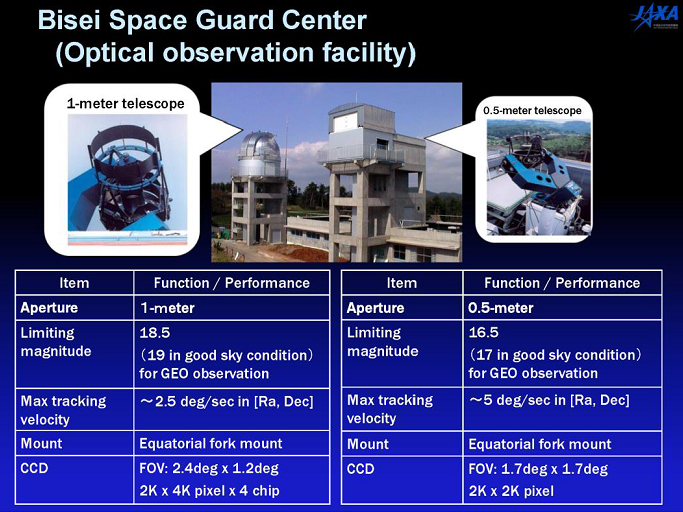 The radar system measures the distance from its radar antenna to a space object by measuring the round-trip time of the radio wave between them. Also, the azimuth and elevation angle of the object with respect to the radar can be calculated by measuring the direction of the reflected radar beam. 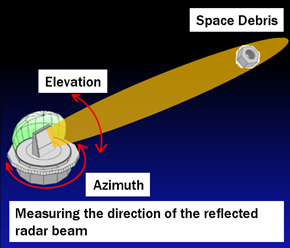 Low earth orbit space debris observed by the radar are going around the Earth multiple times a day, so the visible time from the radar antenna is limited. Therefore, the radar system collects the distance, azimuth and elevation angle data as much as possible during the limited visible time. The orbit of the space debris is determined using the data. In circular orbits around the Earth, the farther an orbit of object is from the Earth, the slower the transverse velocity of the object is, and the slower the velocity on the celestial sphere (the apparent transverse velocity observed from an observer on the ground) is. On the other hand, the nearer an orbit is to the Earth, the faster the transverse velocity is, and the faster the velocity on the celestial sphere is. Thus, the distance of the object can be estimated from the velocity on the celestial sphere. An orbit of a target object can be determined using a set of position and velocity data at a certain observation time (that can be calculated from an observational data obtained by a single observation) when the object is in a circular orbit. However, it is uncertain if the object is actually in a circular orbit or not. Therefore, a set of observational data obtained at multiple points apart from each other in the orbit is required in the orbit determination process. We perform the orbit determination using observational data at multiple observation times. 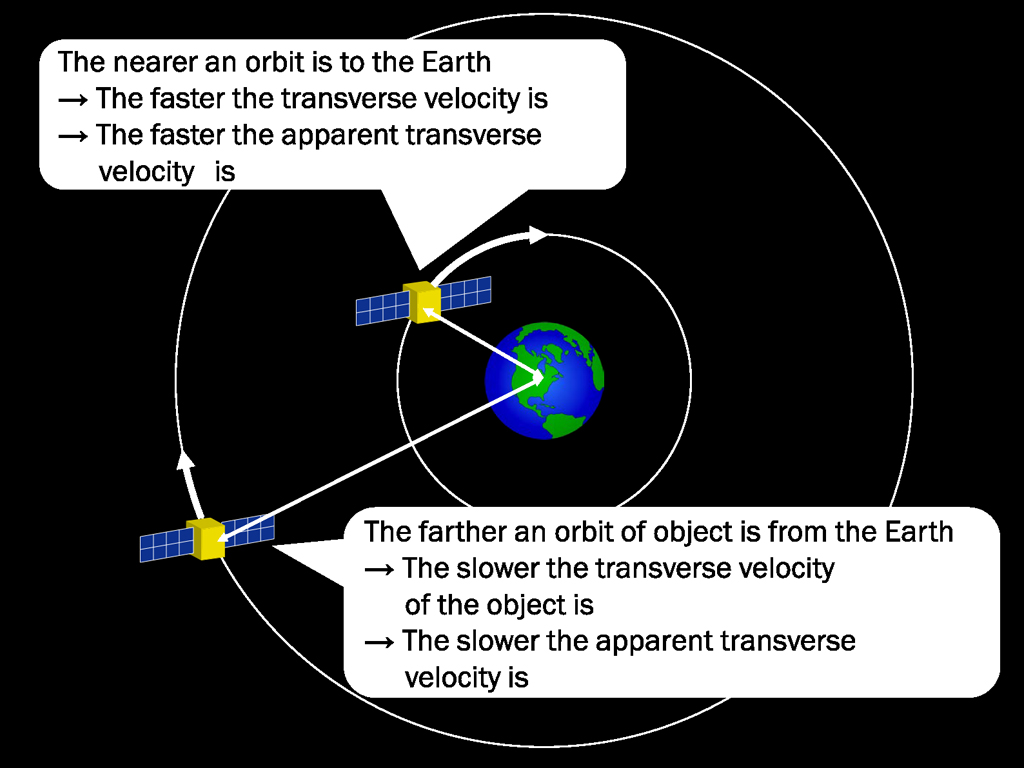 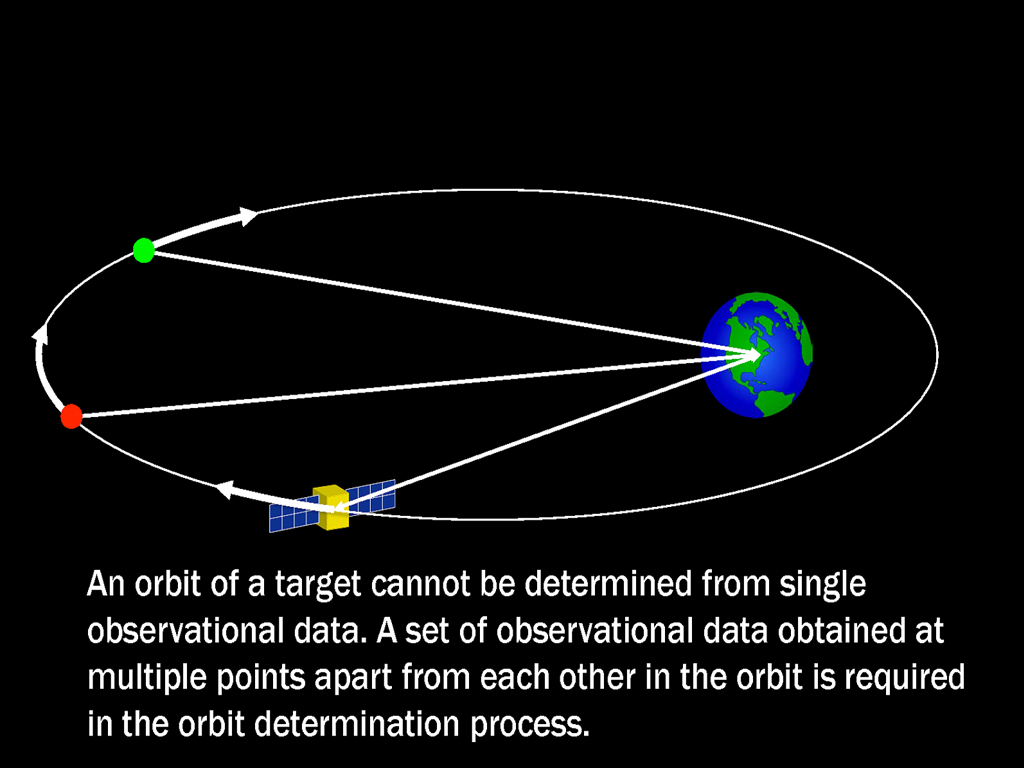 The STCC at Tsukuba Space Center uses observation data from the radar and optical telescopes in Okayama prefecture along with information from US CSpOC to perform various analysis. The four main activities we engage at the STCC are as follows: 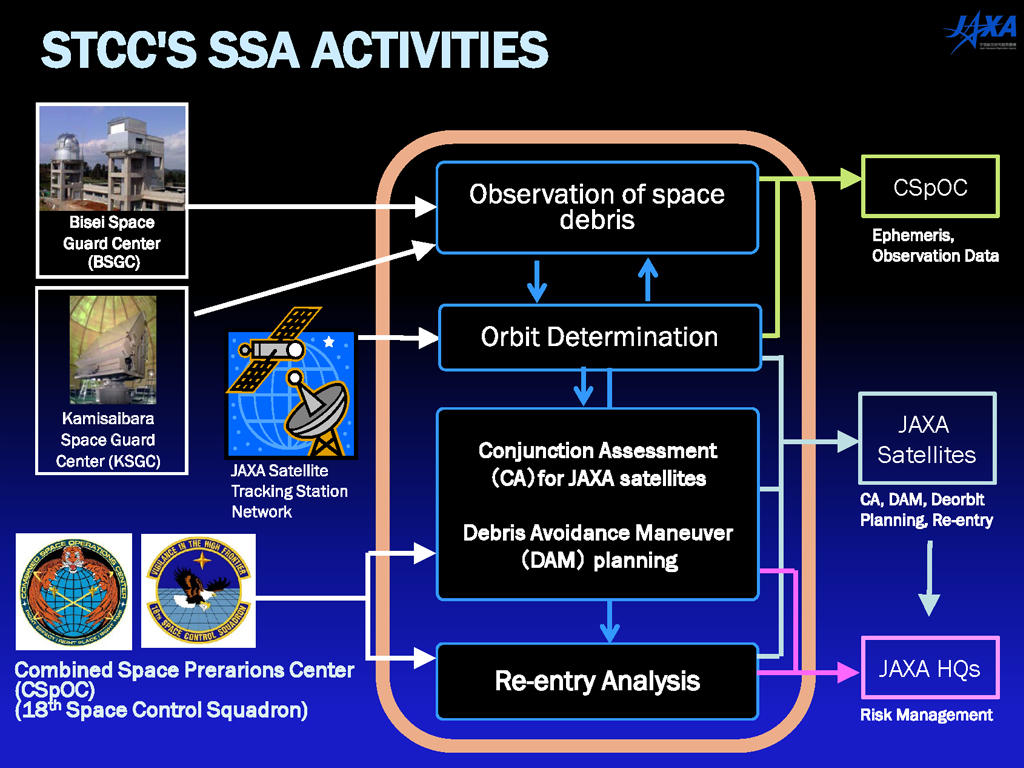 A national SSA system project is under way and mainly developed by the Ministry of Defense to tackle ever-increasing space debris as an All-Japan initiative. JAXA is planning to contribute to this initiative from a technical point of view with JAXA's new SSA system which is expected to start operating by 2023.

JAXA's new SSA system will have a radar that can track smaller space debris than those the present radar can. The new radar will enable us to understand orbits of more space debris; therefore, we need to upgrade our analysis system to process these increasing observation data. We will refurbish the present optical telescopes. Moreover, the new system has scalabilities for future R&D to enhance space debris observation technologies.

As of 2019, JAXA's operating SSA radar is capable of observing objects, for example, of at least size of 1.6 m in diameter flying at an altitude of 650 km. At the farthest, the radar can observe an object 1,350 kilometers away, but in this case, the size of object must be at least 5.5 m in diameter.
However, many objects smaller than size of 1.6 m are flying around the Earth. Almost 20,000 of such objects, which are so-called “softball size objects”, are cataloged and published by the Combined Space Operation Center (CSpOC). As many as 70% of the objects in the CSpOC catalog exist in the low Earth orbit that JAXA's SSA radar covers, but only about 5% of them can be observed by our current radar.

Therefore, JAXA aims to improve the observation capability of the SSA radar so that we can observe smaller softball (10-cm diameter class) size objects at the altitudes below 650 km. For this purpose, we must improve the observation capability of the radar for more than 200 times.
So, we will increase the size of the radar antenna (increase the number of antenna elements), adopt a semiconductor capable of transmitting longer pulses with a higher output, improve the sensitivity of the receiver, and make improvements not only in hardware but also in software such as signal processing technology.
Details will be provided in the next revision. 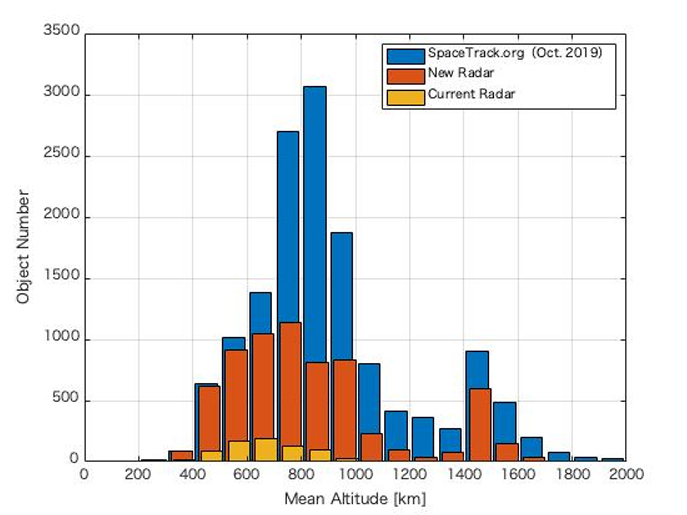 However, current telescopes, especially the 1-meter telescope, began to experience malfunction due to deterioration and other reasons . If this condition persists, there is a risk that observation would become no longer possible. Therefore, we will refurbish the 1-meter telescope to a new one. In addition, we expand the capabilities of both the 1-meter telescope and the 50-cm telescope for the future SSA research and development. Furthermore, we add the functions that enable highly real-time cooperative operations with the analysis system at the Tsukuba Space Center to the data processing system of the telescope. Details will be provided in the next revision.

Click here (Japanese text only) for the factory test (a test to check the movement of a telescope) of the new 1-m telescope. Note that the movement in the movie is 8 times to the real.

As the capabilities of JAXA's SSA radar expand, the number of observable objects will increase by nearly 10 times. To respond to this progress, the SSA analysis system that processes the observed data also needs to improve its processing capacity.
In order not to increase the amount of work by increasing the number of objects that can be observed through the development of a new SSA analysis system, we will not only improve the processing capacity but also devise automatic processing as much as possible. The new SSA analysis system will also add a new linkage function to provide observation data to the national SSA system. We plan to create an environment in which new SSA analysis system can be further studied and developed without affecting daily observation operations.
The new SSA analysis system has the nickname "SAKURA" (SsA Key technology Unified Research and Analysis system) meaning cherry blossoms in Japanese.
As in the previous analysis system, SAKURA calculates the orbit of space debris based on the observation data obtained from the radar and the optical telescopes and compares it with the orbits of the JAXA satellites to see if there is no possible close approach. When an approach is detected based on the results of the analysis or information provided by the national SSA system, further analysis is performed to notify the parties concerned under predefined conditions and to provide information necessary for JAXA satellite parties to plan orbit control to avoid space debris collisions.
Also, when an object that JAXA is interested in gradually lowers its altitude is likely to re-enter the atmosphere, an analysis to predict the time and the re-entry point of the atmosphere will be conducted and the necessary information will be notified to the relevant parties.
New feature of SAKURA is the ability to work with the national SSA system. We are devising ways to ensure that observation can be carried out efficiently, taking into account the observation requests not only from JAXA but also from the government.
Details will be provided in the next revision.

SSA project team logo
On the left is the silhouette of an optical telescope and on the right is that of a radar. The joyful children in the center depict the safe and peaceful outer space.